Priyadarshan has composed this poem that re-fills the breath of shattered spirits. Priyadarshan is a journalist by profession, but naturally a litterateur. So his poems, stories and novels are full of human sensibilities. 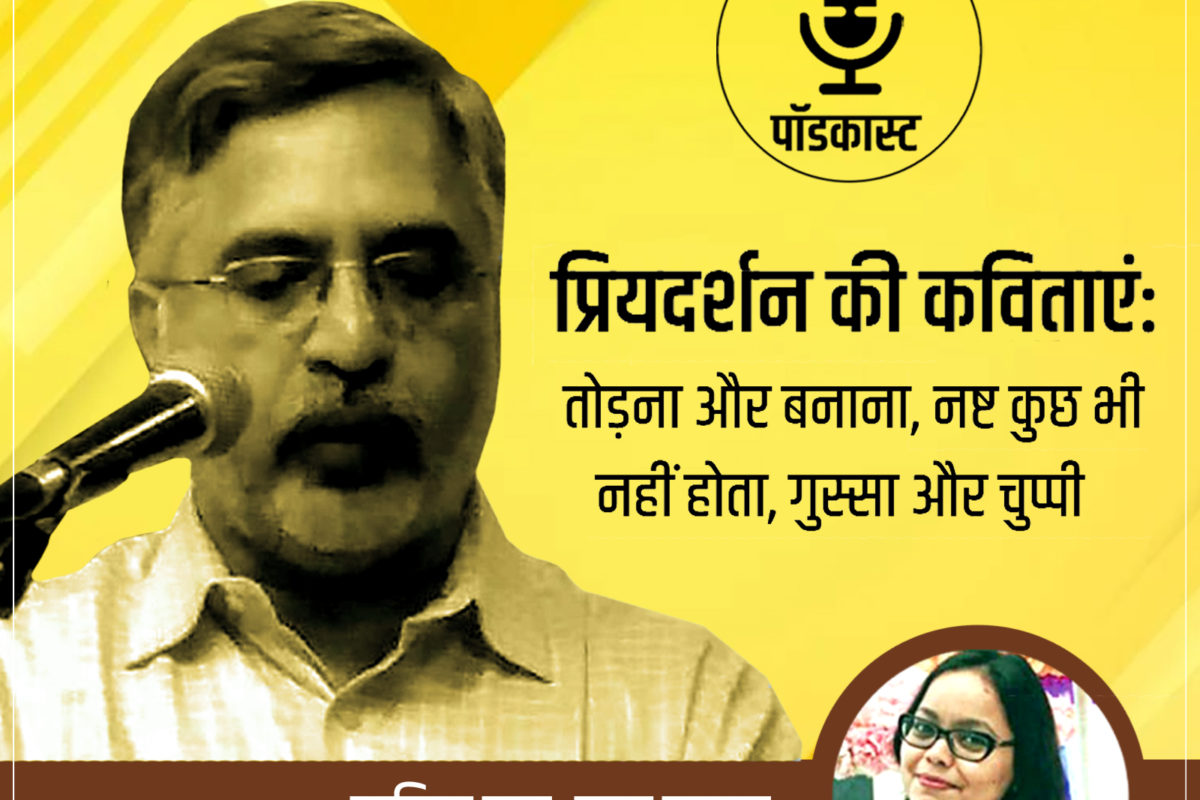 Something goes into making
Not in destroying
It takes effort to make. It takes time for wisdom to take time
Just a little strength in breaking
And there seems to be a little bit of a motive.
Nevertheless, the makers weigh heavily on the breakers
They don’t gasp as much as they make,
Those who break more than that gasp.
Never look tired on the face of a maker
Sweat appears, but smiling,
Scratches appear, but make the body beautiful.

But never the face of a breaker
Have you looked carefully?
He is a gasping, sweaty, ugly face
In which there is as much hatred as the whole world,
More than that by yourself.

Actually the breakers don’t know
that they break themselves first
Whereas the makers make themselves before making something.
In fact, that’s why the hard work of making goes on.
The easy task of breaking dies.

The breakers broke a lot of idols, the burners lit a lot of books
But the Buddha remained, jesus’ crucifixion remained, Kalidasa and Homer remained.
If you make a list of broken things, it turns out to be very long
It comes to a sigh from the heart that how many things have gone away.
How many libraries were burnt, how many buildings were destroyed,
How many civilizations were destroyed, how many values were forgotten

But this truth is greater than this frustration
that still things remained
The hands of the makers continued to create something or the other
New buildings, new civilizations, new fetishes, new crucifixions, new poems
And the process of recreating broken things in the world.

Priyadarshan has composed this poem that re-fills the breath of shattered spirits. Priyadarshan is a journalist by profession, but naturally a litterateur. So his poems, stories and novels are full of human sensibilities. In his blog Vishwas, he wrote in his introduction – ‘Born and educated in Ranchi. The beginning of writing too. Very written. Drowned, bored written, written in fun, written in pasti. Written for the job. Written of your own accord. Written in compulsion, written in drowsiness. Enjoyed writing while writing. Happy to write. Writing still invites you. Written confidently, written in doubt. I am sharing both this trust and doubt with all of you.’ But now his poem I am going to read is certainly a poem of trust and not of doubt. The title is – Nothing is destroyed

Nothing is destroyed,
Not a single particle of dust,
Not a drop of water
Just change all the form

Anger covers a variety of faces,
It comes to talk,
Suffering is hidden in the bottom,
Not by teasing a lot,
Comes out of touching lightly,

Sometimes happiness also comes
dressed in surprise
That life is strange in spite of everything
Because nothing is destroyed
Not even dust, no water,
Not even life
despite death

Indeed, no part of man’s nature is ever destroyed. Similarly, whether it is a man’s anger or his silence – both have their own meanings. Their presence in life is also very important. Priyadarshan has composed a highly sensitive poem about anger and silence. So listen to the next poem – Anger and Silence

Anger comes to a lot of things
A primitive desire to sabotage everything, to destroy it boils down
On which conscience slowly pours cold water
Smoke remains for a while of this anger
You wander from the restless,
Given how wrong the world is, how redundant life is,

In a way, you do well.
Because your anger is of no use
What you want to break will not break
And a lot of other things will go along.
forever

But with the end of anger
Does anger also cause an end?
What is right- goofy anger or sensible silence?
Can there be a sensible anger?
Anger in which the right words come out of your mouth
Something thrown from your hand is exactly the right target.
And just the ones you want to break?

But where will that anger remain then?
It will include the scheme, vigilance
The right target will include the balance of injury
Many people even get such vicious anger
Look at their faces and there will be no anger from anywhere
Maybe, in his words, madhu is still raining
When the fire is smouldering in their hearts.

You won’t even know
And you will fall prey to their anger
Then your destiny or the spirit of others to keep cursing
But like the anger of many
The silence of many people is also dangerous
Even then you don’t know
How bad fire is burning under this ocean of silence
They feel their limits
And perhaps even waiting for your time.
Look by Law
So after a certain extent there is not much difference between anger and silence
Sometimes anger also creates silence
And silence also creates anger

Overall, that’s what’s understood
Some people know how to use anger, and silence.
Anger is also currency for them, silence is also there
They scream very fast and get rid of it even faster
They know the carving of their weapons and their targets are better than you

You don’t get angry or silence
But it does not infertile your anger, nor does your silence be illegitimate.
Just keep a little anger within yourself and a little silence too
Not like currency, like nature
Because anger also creates something and so does silence
Both may not be of use to you,
But others get strength from him
Like you from those others,
Sometimes whose anger lures you, sometimes whose silence scares you.

I leave you and leave you in the midst of this hidden game of anger and silence of human nature. I’ll meet another creator in the next podcast again. Give it to Pooja Prasad for till then. Hello.